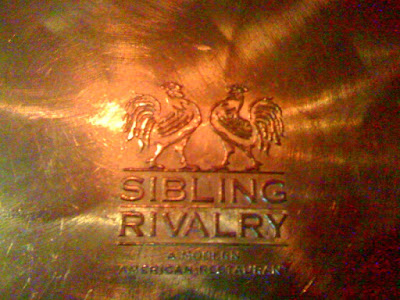 I have always wanted to go to Sibling Rivalry because the premise of the restaurant intrigues me - 2 sibling chefs competing against one another. I also will use any excuse to go to the South End.
Sunday night, I went to Sibling Rivalry with one of my friends. The hostess sat us down at a table right next to the window which was great. However, right next to us was an unkempt table that had not been cleaned up for what it looked like, quite some time. 15 minutes goes by, and my friend kindly asked the waiter to have someone take care of the table adjacent to us as it wasn't a good look. As if we asked him to clean a bathroom! He looked so offended and told us that they were getting to it and the people had just left... right. I also had to ask for bread which I think is quite absurd considering fine dining restaurants are almost always supposed to present bread to you right away! Not to mention, the bread was awful! It was like crappy hotel room service bread - ugh.
Anyway, we order our food, which like I mentioned before, I think it's cool that you get to choose from either chef's menu's. The food was good - I will give the restaurant that. (I do wish though that the actual chefs were there though! Just sayin')
As far as presentation and decor is concerned, I think that Sibling Rivalry has a lot of work to do. First of all, the restaurant had no music on which could have made a subtle change in experience. The color scheme reminded me of a diner. It wouldn't hurt to place candles on the tables as the restaurant is so dark! It was FREEZING in the restaurant.. burrrrr!!! What I found the funniest was the wine list. Their expensive wine list was presented in sheet protectors in the same trapper keeper that I probably used in middle school.
Service was ok. The waiter acted completely different once I finally told him I was reviewing the place. Decor not so great especially for a place that is supposed to be considered upscale. The ambience is definitely not consistent with the restaurant's price point. Location is wonderful. Food was not bad although I got an awful stomach ache shortly after! Overall, it makes me sad to say that this was a HUGE DISAPPOINTMENT! I am sure the intentions of Sibling Rivalry are great but very poor execution. I really hope that this was just a fluke in the system or something... but if not, then I do not recommend you spend as much as they charge at this place :/...
Labels: boston restaurant sibling rivalry south end