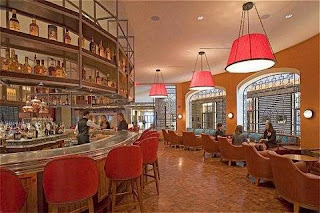 Never have I ever felt the need to hop around so many places in one night out of sheer boredom.
First stop, was the so-called famous RumBa lounge at the Intercontinental Hotel along the beautiful wharf side in Boston. The Intercontinental Hotel itself is everything it promises to be - ritzy & glitzy. As soon as you pull up to the hotel, you can't help but feel so important. Seeing that the hotel was so wonderful made me that much more excited to go to RumBa. But clearly from my last experience, I should have known better than to have such high expectations.
RumBa is so beautifully and creatively built. The structure of the bar makes you feel like you're in a teepee. The red and orange hues plus dimmed lighting offered a very welcoming, cozy sentiment. The circular bar setting allowed for socializing with strangers to be less awkward than usual. The only complaint structurally speaking is that the bar entrance isn't clearly defined from the lobby. The lobby just kind of turned into the bar. Other than that, the place itself was beautiful.
Unfortunately, my friends and I only spent about 15, no 10 minutes at RumBa. Reason? The crowd was just so off from who you would expect to be there. On one side, you had guys with jeans and backwards caps (way too casual). On another side, you had your group of yuppies in velvet sports coats (Velvet on dudes = not hot). And on the other end, you had 50+ year olds in evening wear that arrived in a Ritchie bus (whatever that is). With the right crowd, RumBa definitely has the potential to be a really chill place to go to in the winter when you just feel like staying in one place and having a relaxed evening with your friends.
Labels: bar boston hotel intercontinental lounge rumba