How Films Have Warped Our Perception of Men & Romance

As I become more acquainted with modern-day dating, I'm slowly realizing that most of what I grew up believing about men and romance are completely mythical.

Let me preface this post by declaring that I am not jaded; I am simply observing and learning. This post also is not reflective of one particular situation but is an analysis of my adulthood dating experience thus far.

I'm starting to believe that women of my generation are at a slight disadvantage when it comes to dating mainly because of 2 reasons:


1. We grew up watching Disney movies, the most amazing romcoms [romantic comedies] there ever were, and in my case, unrealistic Bollywood films. We've been brainwashed from the get go that there is one prince charming for every princess [which we all are] and that he'll sweep us off of our feet while effortlessly riding his horse.

Don't even get me started on Bollywood movies...they have falsified men into being super humans. My apologies but they’re just given way too much credit. They’re defying families to be with the ones they love, beating the crap out of the “enemies” in elaborate action scenes, traveling from Italy to India via foot in one week (Oh yes! that is a scene in a very popular Bollywood movie). As ridiculous as you can imagine, it’s been shown in these movies and alongside many, I've believed it all!

2. We grew up in an age when technology was on an upwards slope but are now experiencing adulthood in an era when technology has overpowered social interaction thereby making dating that much more cumbersome.

If you know me personally, you know that I am a HUGE movie buff. I analyze movies to the T. But even I've been suckered into believing some ridiculous scenarios displayed on celluloid. Let's take a look at some of our favorite, widely appreciated romcoms and open our eyes a little bit.

1. How to Lose a Guy in 10 Days
Note: One of my all time favorites. I'll be the first to admit that I'm guilty of having watched it 35 times.
What We Saw: After Andi and Ben both realized they were using each other to advance their respective careers, they walk their separate ways, both seemingly distressed. In the last scene of the movie, Andi is in a cab on her way to the airport to move to Washington DC when all of a sudden Ben flags her down with his curly locks flowing while riding his motorcycle. He admits he's in love with her and convinces her to stay in NYC to begin a life together and live happily ever after. So cute right? WRONG!

What We Should Have Seen: Andi busted her ass in Columbia where she earned a degree in journalism. Throughout the movie, she makes it very clear that writing the "How To" columns were trivializing her degree and what she really wanted to do was be a journalist who wrote more substantial content like politics or world affairs. As Andi was on her way to Washington DC to snatch a golden opportunity, selfish Ben whisks her away from her lifelong dreams by promising to love her forever after having known her for merely 10 days and also having shamelessly used her as a spring board to get an account in his advertising firm. Come on Andi, you're smarter than that.. What an ironic movie title for an ending that showed a girl lose her career dream for a manipulative d bag.

Note: Conveniently, another Matthew McConaughey movie. Perhaps he's been type casted as the resident douche bag of Hollywood. Regardless, I love any movie that J.Lo is in... ;)

What We Saw: The lonely yet successful wedding planner, Mary, finally finds true love in the dashingly handsome doctor, Steve Edison, who also happens to be the fiance of her high profile client. Their love conquers all and they live happily ever after while enjoying M&Ms (all but the brown ones of course) in front of drive-in movie theatre. How romantic... NOT!


What We Should Have Seen: The beautiful and highly successful wedding planner, Mary, succumbs to the temptation of cheating, slimy Steve Edison whose fiance is head over heels in love with him, causing herself to get an ulcer because of wedding planning stress. Steve leaves his annoying but innocent fiance at the altar causing her to feel utterly humiliated because he was hanky pankying with their wedding planner. Meanwhile, he decides to go break another relationship by attempting to stop the wedding of Mary and her childhood friend Massimo. Can anyone say serial cheater/home wrecker? 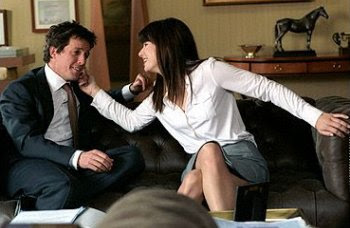 3. Two Weeks Notice
Note: No denying that the chemistry between Sandra Bullock and Hugh Grant is **ELECTRIFYING**.
What We Saw: The endearing development of a friendship/relationship between ivy-league attorney, Lucy, and real estate tycoon George Wade. Lucy and George are complete opposites and witnessing them banter is just oh so adorable. Lucy realizes her work is not satisfying and decides to leave George's company. George's multiple attempts at getting her to stay are supposed to be perceived as cute and heartwarming. Making calls to surrounding law firms and convincing them to not hire her is so adorable? Who does that?

What We Should Have Seen: George became so heavily dependent on Lucy because she was the only pillar of strength and stability in his life. Therefore, when she decided that she was overqualified and wanted to do something that brought more satisfaction to her life, George made all attempts to make sure she didn't leave him i.e. calling everyone in the area and letting them know she was not worth hiring. Additionally, if he had loved her, why would he be shamelessly hooking up with the new annoying, Southern employee right in front of her? Am I the only one who thought George was an immature, spoiled, selfish prick and Lucy was way too good for him?

While I don't think "prince charming" as we've known him exists, I do still believe that true love is out there and in various forms. Is it our fault that we continue to search for this non-existent, unrealistic person who was presented to us while we were impressionable toddlers up until our 20's? Absolutely not. However, I think it's time to make a conscious effort in troubleshooting our expectations and mentality when it comes to romance. Wouldn't it feel better to expect less but be pleasantly surprised when they do exceed our expectations? I think so! ;) xx. Yours truly.